On the road to The Global City 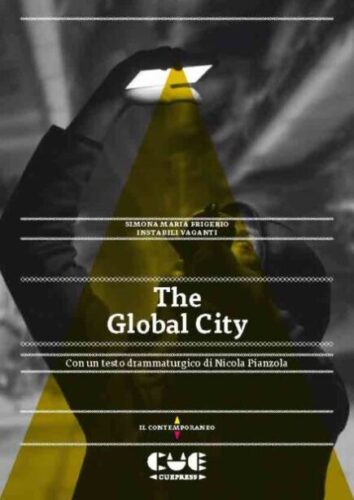 The Global City – the book

Between travel journal, anthropological study and theatrical analysis, The Global City revives the human adventure of the artistic duo Instabili Vaganti during the last seven years of work and international tours until the debut of the homonymous show.

The Global City is first of all a performance, which sees the light in October 2019 at Teatro Nazionale di Genova and which retraces the stages of the personal and artistic journey of the authors.

But from today it is also a book, in which Simona Maria Frigerio, journalist and documentarist, together with the founders of the company Anna Dora Dorno and Nicola Pianzola, tracks back the journey that led them to the development of the same show. A journey across four continents that has marked and fuelled the continuous artistic evolution of the company, both in terms of production and training, the beating heart of Instabili Vaganti. An iconographic section enriches the text also on a sensorial level.

The presentation by philosopher Enrico Piergiacomi introduces some of the main issues that the book examines, the same ones that fuelled Instabili’s research and that now confront the printed word. The conservative power of memory, which for Dorno and Pianzola merges with the dynamic power of travel; the exploration of the notion of megalopolis, a ravenous emblem of our time.

Above all, the genesis of a metropolis that can make us all feel at home – a non-physical space, both real and virtual – which is a utopian fusion of visions, memories, desires. And that makes the spectators imagine ‘the places that really exist which they have never seen, or perhaps only dreamed of, and which, if fused together, can give life to the global city’.

Part One – As we will soon learn, the unexpected is never missing in the theatrical life of Anna Dora Dorno and Nicola Pianzola. And today is no exception, 24 hours away from the debut of The Global City at Teatro Nazionale di Genova, Sala Mercato in Sampierdarena. The dress rehearsal, in fact, is interrupted.

The show has been waiting for 7 years before being ready to see the light. The author, with an inquiring gaze that she will keep throughout the entire course of the book, outlines the architectural and historical context of the space we are in. The first-person story allows us to visualise ourselves there, in the physical space of the performance, with the historical memory that that space carries. We are now just minutes away from the debut. A technical problem, this time concerning the distribution of the audience in the hall, helps to create that uniqueness of which every performance is made.

Some complaints are raised, a woman with glasses has been moved to the second row and will not let go. She wants a front row seat otherwise she will come back for another show. ‘One is as good as another’ she says, and that does not sound like a compliment. An hour after the start of the show, the same lady will ask the author: ‘Why do people travel? If they see bad things, why not sit at home and watch TV? ‘. Perhaps, at the end of the show, she will know the answer.

The Global City is a precious book, which allows us to give order and rework the sheer vastness of experiences – and memories, by nature confused, magmatic and distorted – accumulated during the journey.

Anna Dora will talk about the estrangement while travelling and living in ever new metropolises, ‘different from each other yet similar in their homologating tendency’. And it will speak of the desire to clarify and give meaning to her experiences.

Particularly interesting is the meticulousness with which many theatrical choices made by Instabili Vaganti, are traced back, in the book, to specific memories, characters or episodes, proving how much the circumstances in which the company finds itself are able to sculpt the theatrical form of their work, not only in terms of site-specific performances but also in terms of an ever changing artistic methodology.

The examples listed in the book are various. One above all is related to the international debut of The Global City in Uruguay in August 2019. The theatre that hosts them in Montevideo, El Florencio, is located in a suburban area, moreover among those with the highest crime rate in the whole country (returning from rehearsals, Anna and Nicola often notice an Antinarcotics Unit breaking into houses with guns and bulletproof vests).

Among the indispensable props for the performance is the wire mesh on which to project the videos, which no hardware stores in Montevideo seem to provide. Virtue of necessity, Anna and Nicola decide to rear-project the images and opt for a tulle curtain. A happy choice that will be scenically effective.

Furthermore, several choreographed actions, which take shape in Montevideo and will then be re-proposed in subsequent performances, do not originate from aesthetic demands so much as the mere need to warm up, given that a further challenge posed by El Florencio is the cold.

In Salto, the second stage of the Uruguayan tour, the company will have to change plans and stage the show in Sala El Andén, a former railway depot ‘with tiled floor, damp and with safety problems caused by recent floods’. Once again, Instabili Vaganti make up for the lack of means with inventiveness: they will do without the backdrop that divides the scene and will work in close proximity to the public. The result is one of the most beautiful replicas, and intimacy with the audience will then be systematically sought by the artistic duo in their future research.

These are examples of changes and innovations that will be re-proposed in subsequent shows, eventually even becoming part of Instabili Vaganti’s signature style. Each performance space is first presented by the author through the lens of their historical memory, so that the reader can appreciate the symbiotic relationship between travel, memory and artistic choices. The book then focuses on local traditions, on architectural and socio-cultural aspects as well as on the current political-economic balances that define the context.

Piazza delle Tre Culture in Mexico City witnessed the 1968 Tlatelolco massacre, in which the Mexican army opened fire on about ten thousand students gathered for an anti-government demonstration. In Tampico, where one could hear yelling ‘Aquí tenemos un desaparecido en cada habitación!’, the climate is tense and, inside the Boeing 727 where the site-specific workshop is about to begin, the police break in – so much so that Nicola will find himself with a gun barrel resting on his shoulder while he is intent on presenting the project.

Far from socio-political tensions, realities like Paulihac or Satriano di Lucania, with their strong rural and ritual nature, pose a different question: ‘Is there really a common ground between the metropolises, on which the work of the company should now focus, and this village lost in the hills?’. Each place, with its uniqueness, is welcomed in Simona Maria Frigerio’s narration as a fundamental element not only of the journey, but also of the company’s artistic developments.

And the role that the theatrical space acquires in each replica – as long as the term ‘replica’ can be used for a company like Instabili Vaganti – is comparable to that of a real character, who can only strongly outline the dramatic action. This is a further element of interest that the book brings out and which provides a fundamental key to understanding the poetics of Instabili Vaganti.

Part Two – Part two is dedicated to ‘Anecdotes and urban legends from the Global City’: new stories born in the author’s imagination on the suggestions of the show. From that indissociable magma of ‘out-of-context quotes, songs and musical motifs, unlikely characters, stunning smells and flavors, overheard anecdotes’ that the theatrical journey has carried. Rags of memory, in fact, that mix the lived with probable experiences. Imaginative stratifications capable of generating that ‘post-modern folklore’ mentioned by the author.

Part Three – Part three of The Global City brings us back where it all began, as it woke us up from a dream that lasted a whole night. The author, talking in the first person, finds herself next to the lady with glasses, the same one who was furious for not being able to sit in the front row. ‘Did you like the show?’, she asks another, who says ‘yes’. ‘Me too’, she says.

The spell of theatre seems to have worked. Which, in the author’s words, means to ‘participate in flesh and blood in a secular and collective rite, as old as Western civilization and, recognizing oneself in the verses or gestures, in the songs or in the movements, in the stories or in the myths, to find a fragment of authenticity that makes us more human ‘.

The Global City
by Simona Maria Frigerio and Instabili Vaganti